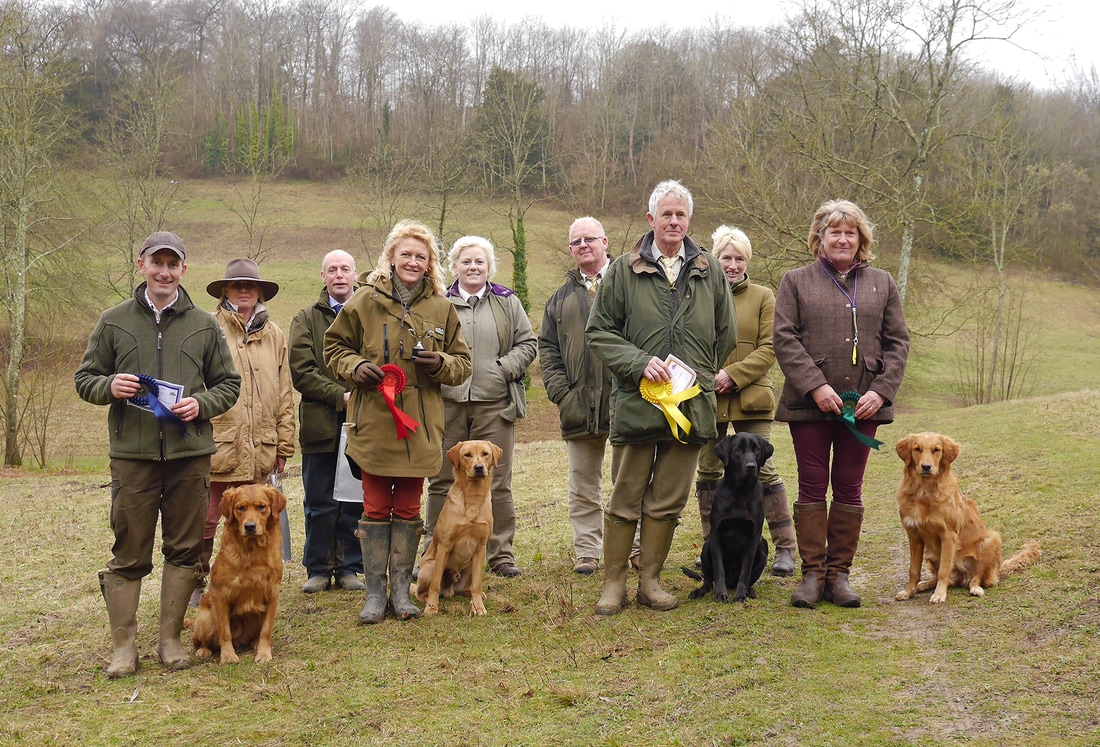 1st and winner of The Parsons Cup: Mitforton Nacho - Louie Robertson
2nd: Abbottshall Pioneer of Higgscroft - Dan Higgs
3rd: Deepfleet Derring of Kittesmeade - Chris Simmons
4th: Tullysedge Mybellenell - Sue Jordan
The first test for any dog is a mementos occasion and one to always be remembered. It’s a BIG day for dog and handler because, no matter how experienced the handler, we are stepping into the unknown. We simply have no idea how our youngster is going to behave and how he will cope with the pressure, until we both do it!

With Puppy and Novice both running on the same day there was a huge field of nearly 60 dogs, so with helpers and judges and stewards probably 80 people present.  Lindsey set 5 tests each for the Puppy, and 5 for the Novice and with so many of the pups under 12 months we were all hoping they would be reasonably straight forward and achievable, though I gather one or two were later altered by the judges to challenge us!

We started out with a mark of 60 yards or so, through a gateway, landing in full view, with a blind in the same place thereafter. The perfect way to start.

Second was a two dog walk-up where the first dummy was thrown without shot quite close to the dog at heel (15 yards) and this was for the handler to collect which was repeated for the second dog. Then after walking on, a shot was fired and a mark thrown for each dog at a distance of 60-70 yards. As we were the last group to go ours was a three dog walk up, which was slightly unnerving as we were in the middle of the group. As I say you just don’t know how the new boy is going to cope until you do it but I’m happy to report we survived!

Test 3 was a double mark to shot above us on a bank with both dummies landing in light cover at an angle of 45% and a distance of about 40-45 yards.

We were asked to nominate which we wanted to pick first and most of us opted for the last thrown. With the previous two tests on short grass the dummy had been in full view but here as it was obscured by the cover some puppies and handlers seemed surprised not be able to pick these quite so quickly and of course the second one was harder after the time delay.

Test 4 was a blind retrieve to shot in woodland without a path to guide and at a distance of about 25-30 yards. Here I understand the presence of both the gun and the dummy thrower was distracting for some of the puppies.

Test 5 was the big one! We stood at the base of the hill and here we were told that there was a blind at the top of the hill, about 20 yards into a wood that was about 80 yards away… but we were going to get a shot (thank you!). Earlier the Novice dogs had been crossing this field from right to left and there may have been some puppies who had watched which might not have helped them. It was a BIG ask of these youngsters and I’m sure we all took a very deep breath as we set the dog up, revved the accelerator pedal and let out the clutch with our heart in mouth. He flew!

Thank you so much A&D and to Lindsey Warren for a fantastic day with super tests to settle the dogs and to stretch them. We are so grateful to the judges  all the helpers for giving up their day so we can run our dogs. Thank you all.