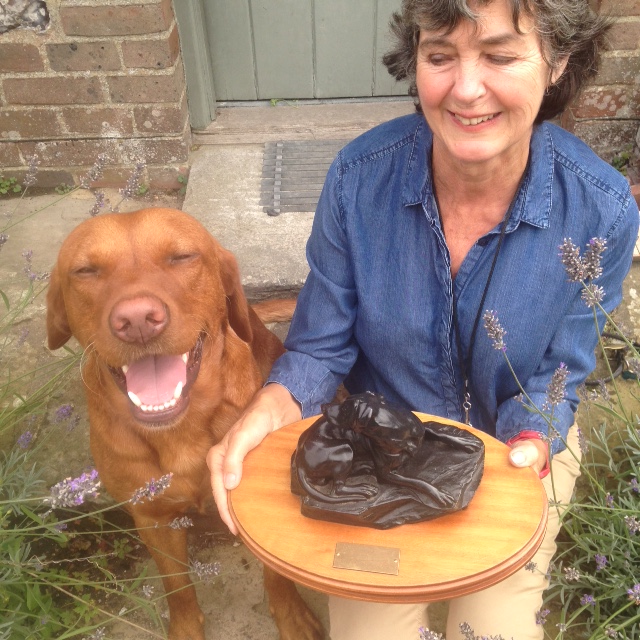 Saturday 28th March 2015. Cold, drizzly, foggy - Jack, my nearly two years old lab and I, in the car , off to the beautiful  Arundel Estate, to take part in our first ever Working Test for Novice Dogs, organised by  the Arun and Downland Gundog Club.

I had been warned that I might feel nervous - that just about summed it up. The fog was hanging very low on the South Downs, the rain was coming down in a gloomy drizzle, and there was quite a lot to feel nervous about ! How would I ever be able to ‘mark’ any dummies ? - I find them quite hard to see on a clear day - how could I possibly expect Jack to be able to see anything either? Would I be able to remember my right hand from my left, would we remember anything at all from the many and various training sessions we had diligently attended?

When we arrived at the Test Ground, all I could see through the mist, was what appeared to be hundreds of very experienced and ultra confident looking dogs and handlers. Undaunted however, I signed in, got my number, and then in an attempt to thwart any attempt by young Jack to disgrace me by peeing in the middle of a test, (apparently this is frowned on), took him up the very long line of 4x4s parked on each side of an increasingly muddy and slippery  track, and let him pee on every single wheel. My strategy in this particular matter paid off - No illicit peeing later in the day and one thing to cross off the worry list .

9.30 a.m and the contestants were called together, given our instructions  and put into groups that we were to stay in for the whole day and we all set off to the site of the first test. Luckily I was almost the last person in my group to go, so despite my earlier fears that every body else looked superior in every way, there were one or two entrants who did struggle just a little bit and honestly, that did make me feel a bit better.(Not very sporting really).

The first test consisted of a blind with a shot at the top of a hilly field and into the wood beyond. There was also a mark with shot into the field, a long way across and to the left. The dogs firstly had to be sent up the hill and into the wood to retrieve the blind. It seemed like a very long way away….  To my amazement, Jack went off like a rocket to what I thought was exactly the right spot and disappeared into the woods. He then re -appeared, alas, without the dummy. Again, to my surprise, he obediently followed my instruction to go back and have another look. This he dutifully did, about three times in all I think, but just as I was beginning to think I might as well go home finally he emerged triumphant,  and flew back down the hill to hand me the dummy. He then went off very happily to retrieve the earlier mark.

As we hadn't been eliminated, we then followed the others on to the next little challenge. This was two blinds placed down a wooded track with a bit of a bend in it. One or two of the dogs were slightly distracted by the noise of shots coming from the test that was taking place in the adjoining field, not to mention the other dogs having a wonderful time. Jack however, I am happy to say, was a v. good boy and apart from being a bit too enthusiastic on his return to me and a tendency NOT to do a text book delivery, we did quite well.

By this stage, I was just starting to feel very slightly more confident, but the third test looked rather more scary. Again there was a blind with shot at the top of an even more enormous field, and another blind placed just to the side of a small copse in the middle of the field. We were to simply send the dogs to retrieve both dummies in any order…..Some of the contestants of course managed this with ease, others, including yours truly, got into a slight muddle about what side of the copse the dummy was on - It was at this stage that I found myself rapidly issuing conflicting instructions and not helping the situation much… Despite all this, my dog performed quite well, and we didn't lose too many points.

Three down, two to go and still not eliminated - I even started to think about how nice it must be to win…..( no chance ). The fourth challenge started from just inside a wooded area, looking down a field, through a wide gateway from where the ground rose quite steeply up the hillside. There was a mark with shot at the top of the hill, and a blind had been placed through the gate way and quite a long way across to the left parallel to the hedge that separated the fields. In order to get the blind, the dog had to be sent on up the hill again, stopped just the far side of the entrance, and sent sharp left. One or two of the dogs were a bit distracted going through the gateway and decided to explore the hedge line, and one or two more were just not concentrating, but my boy did me proud, and if only he hadn't spat out the dummy at me as he came back, I think we would have got a twenty….

The final test- the dreaded four dog walk up… This is where , frankly, it all went a bit wrong for us, and all I will say is, ‘ back to basics ‘ for homework. Not a good score for us , but not a complete disaster either.
The day was over - I/we learnt so much, just by being there and participating . The final score was no disgrace and the more I look back at it, the more I enjoyed it . Without exception, everyone I met was friendly, helpful and encouraging - it has made me want to go back for more!