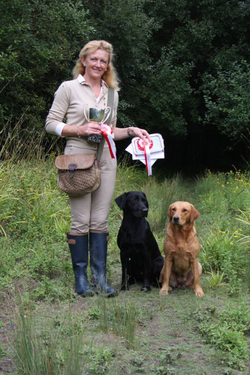 Its pretty hard to describe how it feels when everything just seems to go your way but this was certainly my day!

Sonja Rosell and her superb team of helpers laid on a really excellent test on some interesting ground near Horsham judged by Chris Marshall, Samantha White, Lindsey Warren and Jim Christon

We had four tests each for the puppies and novice dogs and with plenty of very good dogs competing the standard was set to challenge us. We were marked as usual out of 20 but with a very extended walk up with four dogs in line taking in a considerable area of ground with the gallery along side this test was given 40 marks.

To my utter delight Mojo, my puppy aged 15 months scored a total of 100 / 100 and if things just couldn't get better Truly aged 30 months matched his full marks in the Novice test.

It was a thoroughly enjoyable day with a friendly and supportive atmosphere and I would like to say a very big thank you to all the helpers who made the day run so smoothly. And congratulations to my fellow competitors - there were some very high marks awarded for excellent dog work. Results and full report of the tests below... 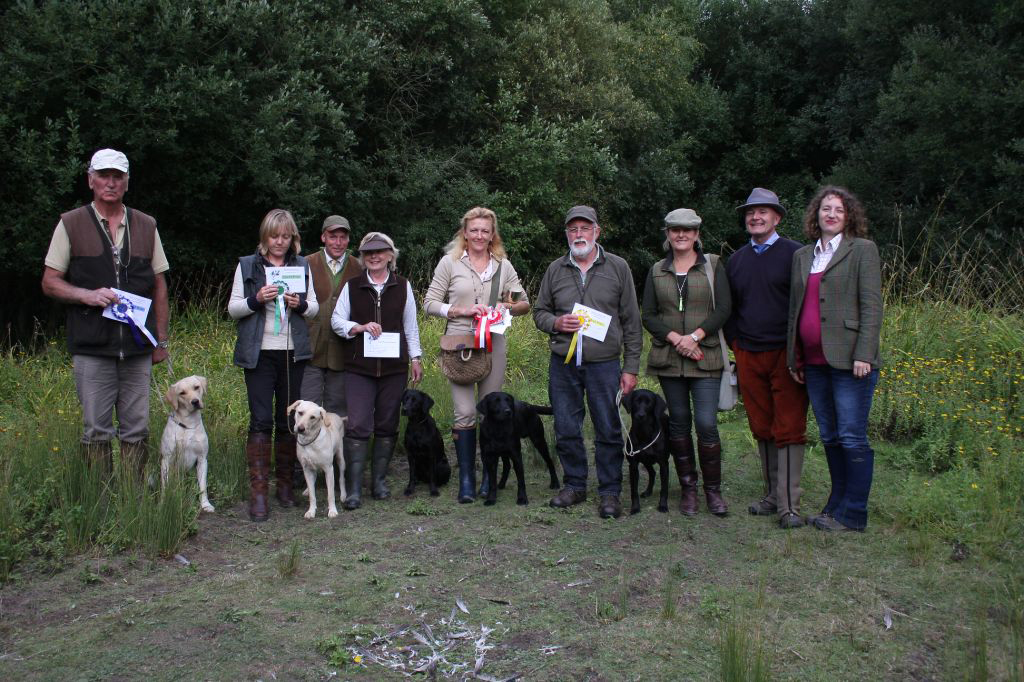 1st Louie Robertson with Troddenmills into the Dark

Test 1
Puppy – this was a mark to shot down a track in a dark wood. The puppies would have to run past dummy throwers tucked in on the left and right either side of the track

Novice – This was a longer mark than the puppies down the same track in the woods following two shots. The second shot was to signal the blind which the judge asked us to pick before the seen. There was a ribbon hanging in a tree on the left to indicate the distance and the dummy was a couple of yards into the wood opposite the ribbon.

Test 2
Puppy – a double mark in an open heath area of the woods. There were two dummy throwers, one very obvious in front and the other tucked in on the left who the puppies might not have seen. Each fired a shot and threw their dummy forwards. The judge asked us to nominate which one we would pick first.

Novice – same area and again a double mark to shot with the left thrown first, away from the thrower to land out of sight. Then the right hand dummy was thrown behind into the wood. The judge asked for the left dummy first.

Test 3
Puppy – In an open heath area with shrubs and bracken the puppies were sent to hunt up 2 out of three dummies about 30 yards ahead. There was no shot and the dummies, orange and green were so placed as to check they hadn’t been swapped.

Novice – Exactly the same test as the puppies but at greater distance.

Test 4
The only difference here between puppy and novice was the distance of the retrieves thrown in this walk up but the pressure level was the same. Four dogs in line we walked and walked and kept walking, taking in a huge piece of ground to properly assess the heel work. First dummy forward for no1, second dummy behind for no2, third dummy forward for no3 and fourth dummy behind for no4 then repeat the whole sequence with the dummy behind for no1 and so forth. The Novice retrieves were at a distance of approx 100 yards, puppy marginally shorter. We were probably in line for 20 minutes and will have walked around 300 yards on each beat. Meanwhile the gallery followed at the edge of the line which was certainly a wind up for some of the hotter dogs but good preparation for the trialling season ahead!